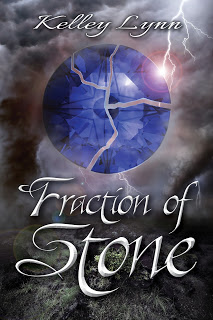 Summary on Amazon: Wind tunnels, torrential rains and earthquakes tear apart Casden. The cause of the world’s imbalance is unknown, but the mounting occurrences suggest there’s little time before life ceases to exist.
Rydan Gale and Akara Nazreth are the only humans with the ability to wield magic. The tattoo on their necks and the discovery of an ancient book, dictate they are the key to the world’s survival.But the greatest obstacle for saving mankind isn’t the bizarre creatures, extreme betrayals and magic-fearing men hunting them.It’s that Akara doesn't believe the world is worth saving.

When I finally bought my copy of Fraction of Stone I was thrilled. Kelley Lynn has been an online friend for a while and her success of getting published was a happy occasion. From the start readers are plunged into a world at war. Akara fights for one side and Rydan the other. Both are the only two in the world to wield magic yet their lives couldn't be more different. While Rydan lives a life of luxury and ease, Akara is locked up and abused. When Rydan's side wins and he sees the same mysterious tattoo on his enemy's magic wielder, life takes a turn neither expected. After saving her life and going on the run, both learn more about themselves and the real world than they ever wanted to know.

Fraction of Stone is a breath of fresh air for the Young Adult Fantasy reader. Both because it kicks out the annoying 'bad boy, good girl romance' formula and also because it's Epic Fantasy which isn't utilized very often in young adult. The writing keeps you entertained and wanting to know more. Rydan and Akara's perspectives are shown in alternating chapters leaving the readers tuned in on what both are thinking and seeing why Rydan's so optimistic and Akara's pessimism as more than just having a really tough life. Kelley truly takes us on a journey where two teens have to go out and save the world and shows magic might seem like a way to make life easier but that there's truth in the quote from Spider Man "With great power there must also come great responsibility". Life is hard no matter how special you are, especially when they're people who want to use what makes you special to their own ends. This is what makes them fugitives on the run and as secrets are revealed and their mission is made clear, there is one question that perpetuates through out this novel. With all the bad humans have done to the world and each other, are they truly worth saving? Magic, danger and hard choices help make is novel a must read both for fans of young adult and readers who want something new to sink their teeth into.

However there are a few issues that made this novel fall short of a perfect rating. First the optimism that makes Rydan so likable in the story also had a bad side for me. The naivete he showed in some matters while it moved the story along got annoying in some instances. It is great to believe in people but when it gets to the point when it's glaringly obvious that things have changed and your wearing rose coloured glasses, it just gets to be too much. Kelley did her best to explain his perspective but it wasn't enough to keep me from disliking some aspects of the story line including his almost ridiculous pleading to a better nature that clearly wasn't there. Also some parts lagged to the point where I had to take a break just to get myself interested in continuing. While these factors never made me decide not to finish reading, it did take away some of the excitement for a little while.

In the end however I really enjoyed reading this novel and I'm anticipating the sequel. I would personally recommend this book to any fan of Young Adult Fantasy or Epic Fantasy.