Amanda Hocking's Blog: Yay! More Things!!!: Okay, first of all I have some pretty awesome news. On January 5th, I get the pleasure of being on Anderson Cooper's new daytime talk show...
at December 25, 2011 No comments:

The following is an excerpt from my upcoming ebook YA novel Rachael Becoming Red. It's a pre-novel to the Red Series. You can comment here and/or send feedback on twitter: #RachaelBecomingRed

Quick Summary: Rachael Wood loses her family in a brutal animal attack. Years later she finds out from Terry that werewolves exist and that knowledge eventually leads not only to the killers but a confrontation with her own village and their secrets.

"How do you know my name?" I asked stepping back.

"Your family was mentioned at the meeting. I'm sure you were there." He pointed out. "Rachael, the man you ran from smelled you. He had your scent and could follow it to anywhere you've been over the past few days."

The man sighed. "He killed your family while he waited for you. He must've become impatient. The council said Amanda kept you late because of the man you saw."

My legs gave way and I fell in the dirt. My family died because of me? Mom, dad, the twins, my big brother. How could they all be killed by a rampaging werewolf? Then it hit me like a ton of bricks. My brother would've tried to get the twins out and anyone who wanted to harm my family had to kill my dad first. He worked with lumber and was huge. There had to be a distraction because my father was killed behind our house and the rest quickly exterminated before anyone would take notice of the screaming. "How many were there sir? Why did it take Amanda and I to find them dead? Wasn't there someone else around? People still move around when they have the prayer vigil at church."

"Call me Terry," he said. "My theory is there were at least three werewolves. The strongest must've led your dad around back. Then he went about exterminating witnesses while the others dealt with the rest of your family." He walked up to me and kneeled. "It's not an easy thing to hear Red. You led that thing to your house by mistake. It wanted to turn you. Must've thought someone your age would've made a good daughter for his mate or something. Most children don't survive the change anyway. A few months at best. Terrible thing to do to a child. Be glad it didn't happen to you."

"He wanted a kid? Why didn't he just have one?"

Terry chuckled. "Werewolf D.N.A. is different from human D.N.A. It's hard for a werewolf male to impregnate anybody. It takes several attempts and even then some babies are born deformed. One even had a werewolf head in my records. Never went away, he was shot days later."

I was horrified. Monster or not it was a baby. I promised myself I'd never harm children. No matter where my quest to find my family's killers took me. I was no child killer. "Did they at least bury him?"

"Yeah, a shame." Terry looked up at the night sky. I looked at his hands and saw them in his pockets. So nonchalant about the death of a baby. A baby that never chose to have a monster head in the first place. It made me angry.

"You bully!" I cried and started hitting his legs. "A baby is precious and defenseless! How dare you ok one being shot just because he had a wolfhead. You're just a big meanie," i declared hitting him harder.

Suddenly I was in the air. Terry had grabbed me by the collar and lifted me to his face. His glasses were gone and his eyes were furious. He shook me twice then flung me on the ground. "No one hits me, not even stupid little girls!" he raged and kicked me.

I screamed. I knew immediately he had broken something. I felt around and got shooting pain by my ribs. This would take a long time to heal here. I slowly propped myself up and took out my whistle. It would bring someone to my aid in minutes. I'll tell them everything this mean man said. That he's just as bad as the monsters.

"Why not, I'm injured. And you kicked me, what if I can't have babies?"

"Huh? No, no," Terry said coming closer. "You can still have beautiful babies. As many as you want. Just don't blow that whistle. It will only bring trouble." He was beside me now and I realized how far I had flown.

"You hurt me," I said tearfully, "why did you do it? I'm just a little girl." I broke into tears. My tummy hurt a lot and I knew I couldn't stand up. My fist grabbed a handful of grass and tore it out.

"Rachael look at me," Terry said stroking my face, "I can help you fight these creatures. Make you strong enough that noven I can harm you without injury. You'll be able to find out who killed your family and maybe one day return to protect your village." He took me in his arms and lifted me off the ground. I leaned into him but still held unto my whistle.

Dreaming in Black and White: x-2 (1): I decided to share with everyone pictures of the characters from Raison D'etre, the novel I'm currently working on. I must warn you that Mol...
at December 10, 2011 No comments:

I laughed after reading this. How awful!

Another Day with the Living

Cruelty comes in many forms-ignorance is one of them. - Olivia Winefield Foxworth from Garden of Shadows (a novel by V.C. Andrews)

I should have already started writing for today but haven't. I plan to though, even if it kills me. But that right is currently held mainly by this horrid flu I'm having. I swear just moving makes me feel like an old woman and all the flegm, ugh! Also I yet again missed a chance to see the Breaking Dawn Movie. Jamaica's ruling political party (JLP) had a rally and circumstances just didn't mesh with movie going. And people I knew practically screamed "no way! stay home!," and well...I did. 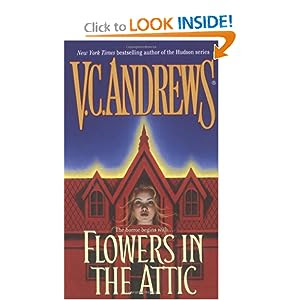 Also I finally bought the only V.C Andrews book in The Dollangangers series that I haven't read (unfamiliar? Remember Flowers in the Attic - book or movie - I've done both), Garden of Shadows. I promise it will make you see Olivia in a new light. If you don't know who she is do a google search people, no major spoilers. But the book really shows how she changed into who she was in Flowers in the Attic. The woman in this book is a complete 180 to the woman who intimidated the children in Flowers in the Attic. It's sad really, I don't excuse her actions but all sorts of things screw people up. She got a world of it. So much for a practical woman finding happiness. She left her secure home for a beautiful madhouse. Read the book if you doubt me. And trust me it's a great read, but sad story.

Today most mainly another day at home with the flu, doing chores and getting my lazy sick ass writing. Oh and a little TV, yes I don't engorge myself until my two evening talk shows and nighttime series- new Law and Order: SVU tonight!

Email ThisBlogThis!Share to TwitterShare to FacebookShare to Pinterest
Labels: flowers in the attic, law and order: svu

My First Bit of Exposure!

I am excited to say that the excerpt of my Lyric World novel posted yesterday made it on an online Journal today. I mean, I posted this last night! No one expects their work to be noticed that quickly. I was under the Arts and entertainment section and there were photos of others including J.K. Rowling. What more could I ask for right now!

I'm just bouncing. It's nice to have your work acknowledged! Thanks AnneNikolaus for posting it and tweeting me!

The following is an excerpt from my Nanowrimo Novel Lyric World. It's about a world where all the countries are music genres and a war is brewing.

The 90 Best Cartoons of All Time

Can I Have Your i-Pad?

FicBookReviews: 700 Followers Giveaway! $50 Amazon Gift Card: Wow cant believe I have reached 700 after celebrating my 500 followers last month! Congrats to Felipa Munez and Stacey of Sassybooklovers....
at December 02, 2011 No comments: