Waiting on Wednesday: The Girl King

When I saw the cover reveal for this book, it took my breath away. Then I read the blurb and knew I had to get my own copy. There's no question that this sweeping three perspective novel is right up my alley. I can't wait for 2019. 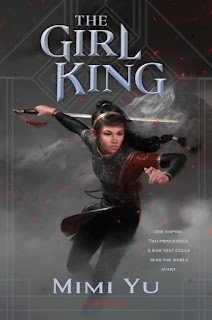 Blurb: One empire. Two princesses. A war that could tear the world apart.

Sisters Lu and Min have always known their places as the princesses of the Empire of the First Flame: the eldest, assertive Lu, will be named her father’s heir and become the dynasty’s first female ruler, while timid Min will lead a quiet life in Lu’s shadow. Then their father names their male cousin Set the heir instead, throwing both girls’ lives into chaos.
Determined to reclaim her birthright, Lu is forced to flee, leaving Min to face the volatile court alone. Lu crosses paths with Nokhai, the lone, unlikely survivor of the decimated Ashina, nomadic wolf shapeshifters. Nok never learned to shift—and he has no trust for the Empire that killed his family—but working with the princess might be the key to unlocking his true power.
As Lu and Nok form a tenuous alliance, Min’s own hidden power awakens—a forbidden, deadly magic that could secure Set’s reign … or allow her to claim the throne herself. But there can only be one Emperor, and the sisters’ greatest enemy could very well turn out to be each other.
Told in three distinct points-of-view, this first book in a sweeping fantasy series weaves a story of ambition, betrayal, and sacrifice.
So what do you think? Is this story up your alley? Isn't to cover breath taking? Thanks for stopping by. Netflix Nation will be back to Fridays only as of next week.
at May 23, 2018 2 comments:

Top Ten Tuesday is a weekly meme created by The Broke and the Bookish and hosted by The Artsy Reader Girl.

I generally enjoy most of the books I've read. So I decided to just list the books I didn't like reading because I'm not usually glad if they were unenjoyable. This list is in no particular order except for #1.

1. Riot School by Robert Rayner - This book was absolute trash. Not sorry, it was racist, Islamophobic, Anti-Muslim, sexist, misinformation and so many other things. Worst of all it was touted as educational material for young readers. Just thinking about this book makes me upset. As if we are not already trying to make the world a better place without this crap. A huge no!

2. Soldier by Julie Kagawa - There was so much potential but it got bogged down by a sudden switch in focus and a drop in writing quality. The love triangle was always around but when it suddenly took priority over everything else without reason it just messed up the third book in this series. I continued since not everything was awful but I still don't understand why this book even exists.

3. The Iron Trial by Holly Black and Cassandra Clare - If you wanted Harry Potter to bore you, here's the perfect book.

4. Willow by V.C. Andrews - So boring it's almost fatal. Stay away!

5. The Mortal Instruments: City of Fallen Angels by Cassandra Clare - I feel so betrayed. What did I do wrong universe? I love this series and the author but I think this book tried to kill me. I'm just floored, it was so bad.

So that's my list this week. Thank you for stopping by and I'll be trying to post regularly as of now. My health has been unexpectedly in a downturn of late. Take care.