N is for Nuclear Wars 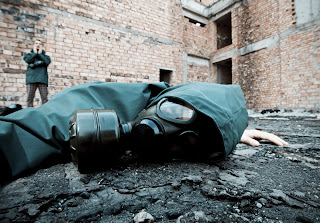 The Nuclear Wars (five in all) are what tore the Old World apart. The first war started when disputes between several countries. After the first attack happened, other countries either saw an opportunity to attack their enemies or decimate weaker allies.

In Sacrifice Her, Kale says one major reason the Nuclear Wars was greed for oil.

No matter who started it in the end much of the world was destroyed and many people left displaced. This lead to a lot of people going into survival mode since the technology that helped them so much in the past was gone.

Resulting in people becoming susceptible to superstition and manipulation, many versions of how the world ended up fractured developed. In Sacrifice Her, Faux City has their own version with Bane saving their ancestors from The River Women.
at April 16, 2013