Rachael Becoming Red Shelved, Other Works to be Released

I have reached a decision. Rachael Becoming Red will be shelved for a complete overhaul of the Red Series. This was a tough decision for me. I had made a facebook page, done promotion and even had two authors of their own books declare excitement to me personally and place as to-read on Goodreads. But I knew it was the right decision. As much as I wanted to release it, I began to realize there were a lot of issues relating to plot holes, story line, poor plot lines and other problems. The book was too 'historical' of Rachel's life before becoming an agent of the T.O.

Originally I was going to start with her in T.O. as a teen. But I decided after starting that book to make it book two. Wanting to do an actual book one before she was an agent. While it started well I belkieve I fell into the trap of trying to be different and not remembering my audience. A few misgivings went ignored but as the release day came at hand, I knew the truth. This book wasn't going to be ready for release. In fact it needed to be axed from the series itself. So after grappling with it I decided to axe the release and shelve the series until late 2013, early 2014. I have other novels to focus on and 2013 will be when I plan to start querying Circa and Lyric World if they're ready. 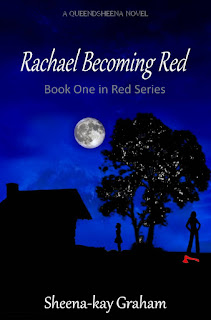 My focus will now be on three other works set to be self published this year. The Sacrifice Series that came to me early this year is going well and I plan to publish the first two novellas in 2012 as ebooks. Click here to find out more. The next book is Snow, a novel set in my home country Jamaica. It's a contemporary version of Snow White with Samantha a.k.a. Snow hating her father and doing everything possible to make him and his step-family miserable. This novel is coming out in November as both paperback and ebook. Will post more about it in the coming months.

Life as a writer was never meant to be easy. Looking at my cover for Rachael is hard. I feel that I put all this work in just to shelve the book. But I know it's the right decision. It will be a much better series when it comes out late next year earliest. I wanted to post about this earlier but computer issues, nerves and other things held me back. Thank you for reading and I hope you continue to follow me on my writing and blogging journey. Special thanks to all my dedicated and ongoing followers and commenters. Hi to all new ones.