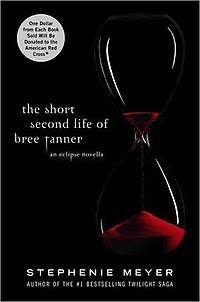 The Short Second Life of Bree Tanner: An Eclipse Novella
Genre:
Published: June 5, 2010
Source: Bought at Barnes and Noble
First heard of: Online, Me being a fan of Twilight series
Purchase: Barnes and Noble, Amazon

Summary from Barnes and Noble:

Fans of The Twilight Saga will be enthralled by this riveting story of Bree Tanner, a character first introduced in Eclipse, and the darker side of the newborn vampire world she inhabits. In another irresistible combination of danger, mystery, and romance, Stephenie Meyer tells the devastating story of Bree and the newborn army as they prepare to close in on Bella Swan and the Cullens, following their encounter to its unforgettable conclusion.

Review: Bree Tanner is a charcter both to be mystified by and to pity. Those who are familiar with the Twilight series know how this story will end. But this novella shines in the how, leadup and why. In this novella we also meet up with other characters including Diego the other vampire in this army made to fight the Cullen vampire clan. She falls for him and both want to find out more about life on the outside as well as the vampire who created them but is only known as 'her'. As secrets are revealed and Bree gets closer to another vampire named Fred things become more dangeruous. I love this novella because it drew me in and had me reading straight to the end. The characters are captivating and the story is compelling. Another great work by Stehenie Meyer.

Now here's the bad news. Not a big faux pau but the issue with this novella is also the fact that those familiar with the Twilight series know how it ends. This makes us including myself a little more interested in the surrounding elements in some parts of the novel than Bree. Fred took a lot of shine from Bree both because he's not well known and all his short appearances in the book carry deeper meanings. A minor character should compliment not outshine the main character and that is how this book fails. But it is a small failure and should in no way keep you from buying this book if you're interested in vampires of the 'Stephenie Meyer' variety. Carpenter vampires they are not.

For more on the novel: Goodreads, Bree Tanner