What If? Fairytale Madness Blogfest

Today I'm partcipating the What If? Fairytale Madness Blogfest. Special thanks to judges: Cassie Mae, Morgan Shamy, Mark Koopmans, and Leigh Covington. My entry is for Team Plot Twists. Best of luck to everyone entering stories in this blogfest. 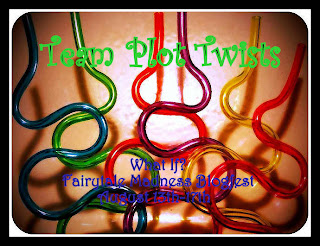 Peter Pan sat in the mess hall shackled. It had been a month since he and The Lost Boys were captured. He was locked in a cell, they were taken down below. Anytime he saw them, he ached.

He refused to eat as Captain Hook walked in. "Son!" he lit up upon seeing Peter.

The pirates burst out laughing when Peter recoiled. "Stop calling me that."

Captain Hook walked up to him. "Please understand that everything I've done was for you Edgar Hook."

Peter refused to acknowledge him. Every time he recalled the truth he felt sick. Both once lived in another world. They were Amelia, Carter and Edgar Hook. They were very close, even after Amelia died of pneumonia. But everything changed during an Easter Egg Hunt. Edgar saw a portal and tripped. Carter went after him and screamed upon seeing Edgar unconscious. Tiger Lily found then and they went to her village.

But during a pirate attack Hook was captured and spent years on their ship. He eventually broke free and took over by killing the former captain. But by then Edgar had become Peter Pan and had no memory of his past. Filled with bitterness Hook waged war against Neverland and plundered innocents all the while plotting to get his son back. Now he'd succeeded.

Peter finally looked at Hook's hopeful face. The captain regularly bombarded him with stories and photos. And despite no recollection Peter knew one thing. The Carter Hook described to him died long ago. Even though Hook let Tiger Lily and Tinkerbell go. He left The Lost Boys to the mercy of lecherous pirates.

"I waited thirty years for you. We can start a new life."

Hook grabbed him by his shirt. "Then you and your friends will rot here."