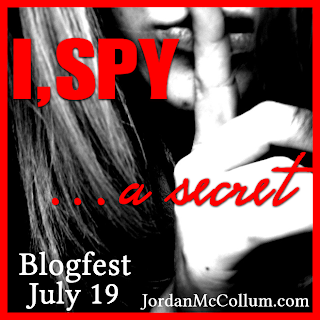 Today I'm taking part in the I Spy...a Secret Blogfest.

I'm sharing an excerpt from my WIP Shade Me. Cassie is a Shade (a nice version of a wraith) and she has decided to take human form. But her best friend Lizzie is uncomfortable around anything non-human. Making it hard for her to reveal herself.

"I know," Lizzie breathed, "so about Bradford. Has he let go the dream of being your beloved?"

Cassie grunted. Bradford was a vampire with incredible looks and an ego to match. As far as she was concerned he could jump into a volcano. But for some reason no matter how much she blasted him, he refused to leave her alone. Recently she decided to just ignore him. While it gnawed at her insides not to answer him she got the satisfaction that her silence was starting to irk him too.

"You can have him whenever you get tired of Jessie," Cassie said in a syrupy sweet voice.

"Ugh, no," Lizzie turned that down, "I only hang out with the human crowd thank you very much. Just the thought of being around anything non-human too long makes me shudder. They can have their rights, I have the right to turn around and walk away."

Cassie bit her lip. This was the hard part of being friends with Lizzie. Hearing the happy blonde strike down anything non-human as awful or unnatural hurt. What she wouldn't do to have a close friend who'd allow her to make her true self known. I'm such a hypocrite. "Right."

Well there you have it everyone. My entry for the bloghop. Enjoy your weekend.
at July 19, 2013

Email ThisBlogThis!Share to TwitterShare to FacebookShare to Pinterest
Labels: I Spy...a Secret Blogfest