Book Review: Planet of the Lawn Gnomes (Goosebumps Most Wanted #1) by R.L. Stine 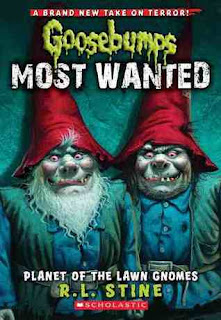 Summary on Netgalley: Catch the most wanted Goosebumps characters--undead or alive...

The infamous, Most Wanted Goosebumps characters are out on the loose and they're coming after you! There is no place to hide. Nothing is safe!

Jay Gardner is a mischievous kid who can't stay out of trouble. Unfortunately, Jay gets in so much trouble, his family is forced to move. But there's something odd about Jay's new town. Why does everyone have lawn gnomes in front of their homes? And why is everyone afraid to go outside at night? Jay is about to learn that mischief can lead to terror.
R.L. Stine's books have sold more than 300 million copies, making him one of the most popular children's authors in history. Besides Goosebumps, R.L. Stine has written series including: Fear Street, Rotten School, Mostly Ghostly, The Nightmare Room, and Dangerous Girls. R.L. Stine lives in New York with his wife, Jane, and his King Charles spaniel, Minnie. www.RLStine.com.
Review

Jay's family have to move to a new neighbourhood thanks to his overwhelming mischief making. A smart kid he could accomplish so much if he wasn't such a fan of pranks. But something strange is going on in this new place. Lawn gnomes are everywhere and it isn't long before he gets suspicious that they're doing more than just sitting ugly on every neigbour's lawn. Worse no one wants to go out at night, not even the new friend he makes. Jay is determined to find out what's going on but his inquisitive ways and inability to stop pulling pranks gets him into deep trouble. And the Lawn Gnomes aren't going to just lounge around waiting for this boy to change his ways.

When I read this book I expected to get something new from R.L. Stine. And I did, a new story that kids who are fans will enjoy and nostalgic adults with me want to read. You're taken on a journey of middle grade horror that has twists and turns 'til the very end. It is an enticing read. But some poor pacing and twists that aren't properly explained will take away some of the joy. I highly recommend this to fans of child horror.

Email ThisBlogThis!Share to TwitterShare to FacebookShare to Pinterest
Labels: Book Review: Planet of the Lawn Gnomes (Goosebumps Most Wanted #1) by R.L. Stine