Before I start I want to drop a quick thank you to all who were supportive on my friend's only Facebook post over the weekend. I had a hard time dealing with some financial set backs thanks to both health and freelance sales drop issues. It was great to see all the support that poured in. It is great to know when my cheer leading pep starts to dim...I have such lovely live pick me ups. Thanks.

Anyway unto another segment of Netflix Nation. Today I'm chatting about the latest shows I have watched on Netflix.

Honorable Mention: Re-watching Once Upon a Time Season 5, Teen Wolf Season 3 and last 3 episodes of The Shannara Chronicles. 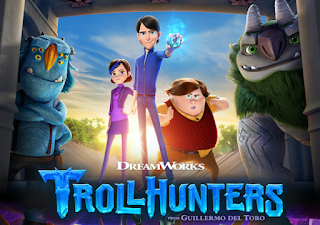 I had genuine fun with this one. Voiced by the late Anton Yelchin, Jim is a teenager who suddenly got tasked with the role of Troll Hunter. The first human who has to protect both humans and trolls a like from the evil of their kind. The evil trolls come in various forms and some are quite deadly. Add in the drama of the previous troll hunter's son being furious at not getting the mantle, you have one fun show to fill in your animated Netflix space. This is part fantasy, part action adventure, a mix of teen angst and a healthy dash of soap opera. Trust me when one of your enemies is making moves on your mother, that is a page right out of soap opera play book. But I won't spoil the show for you. There's enough butt kicking action and ridiculous new names and phrases to stick your tongue at. Guillermo Del Toro helped create an interesting world.

Watched this last night only to prepare myself to watch Underworld: Bloodwars later this month. Tried on cable and it was unwatchable (barely looked for 10 min). With Netflix I'm able to pause and gauge myself. I enjoyed the first two Underworld movies and thought the third was decent. None of them are made to be the gold standard of cinema but they each have their charm. Sadly this movie in comparison lost a lot of it. Part of the reason I got into it was because it was so long since I've watched this series. I plan to marathon it at some point soon but on a whole this movie is only for those with nostalgia for the series or willing to try something new with no set expectations.

My Frank Rating: 1 Star (seriously, it was just such a nasty set up. Sci-fi time jump was stupid)

In my anger about Dominion being cancelled on SYFY, I had no intention on supporting them much if at all. I decided to give this a shot out of curiosity. On a whole it is a crappy show with engaging characters. The actors save this dumpster fire by making you interested in what happens next. Aside from that it is just a cheap SYFY show to grab people's attention. Thank God they still have 12 Monkeys to try and pretend they make much more than schlock on that channel. Everything looks cheap and super low budget. Some scenes could be better done in fan made movies. Oh you want the plot? Van Helsing rip off staring a female version who just happened to be born when volcanic ash blocks the skies and lets vampires go out into the open. Yes I'm serious about that being the plot. Oh and she awakens from a coma and needs to find her daughter. Talk about sticking to the shallow end.

Rating: *Laughs* An old peanut - 1/2 Star for catching my interest to watch a whole season

Oh heavens. How did I get addicted to this show? So much I find ridiculous but I had to watch Season 2 episode one soon after it hit Netflix. Why? Because I got dragged in that's why! Too many of us Mortal Instruments fans just wanted them to do a damn show already. The movie that stuck partly to the book tanked so instead we have this insane mash up. Still I am watching and enjoying it as I rebuke myself for watching such a ridiculous thing. But damn I'm having fun and want to re-watch some episodes from Season 1. Gone far since episode one where I left half way because I felt like I was getting an ulcer. Quite a spin you guys did with a Netflix drop that got me back in small doses. There is definitely some dark magic going on. Help me!

Netflix Rating: 2 Stars but I'm not to be trusted

So what do you think? Have you watched any of these shows? Do you have any recommendations on what I should watch next? Let me know! Thanks for coming by guys and I'll be announcing the winners of the Thank You giveaway Friday. God Bless. See you Wednesday. For real.
at January 09, 2017