Today I'm taking part in the Snow White Sorrow Book Blitz as a tour host for Xpresso Tours. I've read four of the six prequels to this upcoming book and will recommend everyone to read them and await this amazing upcoming book by the talented Cameron Jace. 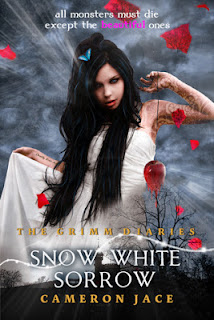 Snow White Sorrow by Cameron Jace: February 2013 / Akmal Eldin Farouk Ali Shebl
--
What if all you knew about fairy tales was wrong?
Sixteen year old Loki Blackstar is no Prince Charming. His mother is a ghost. His only friend is a red Cadillac that talks to him through the radio. He looks like an Angel but acts like jerk. No wonder he has been banned from Heaven, which is the least of his troubles. Loki needs a job to pay for school and support himself.

Still, Loki has a rare gift: He is a Dreamhunter. One of the few in the world who can hunt and kill immortal demons in their dreams so they never wake up again.

When Loki is sent to kill a sixteen-year-old vampire girl the locals call Snow White Sorrow, he is pulled into a magical but dangerous world. The locals believe the monster to be Snow White.

The real Snow White... living in the ruins of an ancient castle in a small town. She is described as horribly beautiful, terrifyingly enchanting, and wickedly lovely.

What he finds instead is a beautiful monster girl filled with rage and hurt, who has an epic untold story to tell of things such like why the Brothers Grimm altered the fairy tale, who the Evil Queen really is, where the mirror came from, and who possessed it.

Snow White has killed every person who has dared come near the castle where she once lived with the queen. Mysteriously, she lets Loki live, and whispers two words in his ears; two words that will change his life forever.
--

Special Note: All "Likers" of Cameron's Facebook page (https://www.facebook.com/camjace) will get to notified of the exact release date, which is also when you will be able to get Snow White Sorrow for only 0.99 for only that 1 day. Cameron would appreciate it if you would mention this on your post, along with the link to his Facebook. And don't forget to like it, too, if you want to take advantage of this great deal when it comes!

The Grimm Diaries prequels:
This Grimm Diaries Prequels are a number of short books in the form of epistolary diary entries. The diaries are more of teasers for the upcoming series: The Grimm Diaries, allowing you to get a glimpse of what to expect of the series. The 6 diaries are told by The Evil Queen, Peter Pan, Little Red Riding Hood, the Devil, Prince Charming, and Alice Grimm

Author Warning: these Grimm Prequels are snap shots of a magical land you're about to visit soon. I like to think of them as poisoned apples. Once you taste them, you will never see fairy tales in the same light again.

Please mention that until December 13th, the prequel pack (all 6) for Kindle is only 0.99c! Purchase link:  -Amazon: http://www.amazon.com/dp/B00AA4JIWC 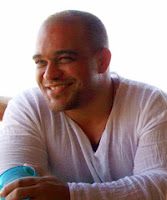 AUTHOR BIO
Cameron Jace:
Wonderlander, Neverlander, Unicorn-chaser, enchanter, musician, survived a coma, & totally awesome. Sometimes I tell stories. Always luv the little monsters      I write young adult paranormal romance, urban fantasy, and science fiction mostly. The Grimm Diaries series is a seven book saga that deals with retellings of fairy tales from a young adult POV - it connects most of the fairy tales together and claims to be the truth about fairy tales.      I live in San Fransisco and seriously think circles are way cooler than triangles.

She is not that giddy, naïve, and helpless princess she pretends to be. Please don’t let her fool you with her innocence if you see her sing to the birds in the forest. Resist her charm from bringing joyful tears to your eyes, and shield yourself from her devious beauty before she deceives you into wanting to kiss her awake. It'll  be a kiss of death. Your death. That’s how she fooled the Huntsman, Prince Charming, and me, her birth mother.

I still remember the original script of the fairy tale, the one you wrote in 1812. It clearly stated that she was my own flesh and blood daughter. I don’t have the slightest idea why you altered it fifty years later.

What was the point of turning me into an evil, narcissistic, and heartless stepmother, blinded by jealousy and envy of the young princess?

For years, I have been looking forward to telling you the truth about her, but you were impossible to reach.

I am glad I found your brother, Jacob. He told me that you wanted to tone the stories down so children could sleep better at night, instead of having nightmares about the Queen who sought to eat her daughter’s heart and liver.

Shame on you, Wilhelm.

You, of all authors, knew why I wanted to kill her. My actions were justified. I was trying to save my kingdom from her wrath, before everything we loved was destined to an end. The same way you had to rewrite the true fairytales after cursing us, so the War of Sorrows would end forever after.

Night after night, and year after year, parents fed their children false bedtime stories, until your lies grew into inescapable memories. Your happily ever after lies, Wilhelm, shaped the so called fairy tale world.

I wondered why you didn’t burn the original scripts, instead of rewriting them. You must have figured out that sooner or later someone would dig up the truth and expose you. Altering it was the smarter solution. You let children believe that the bites were resurrecting kisses, and that torturing glass coffins were made for sleeping beauties, waiting for a prince to come and kiss them awake.

A wise man once said that the greatest trick the devil ever pulled was convincing the world he was someone else. You did the same with us, Wilhelm. You turned us into pastiches of the immortals that we really are, and made it harder for us if wanted to persuade the world otherwise.

I know that you did it to save us from her. And I appreciate how you concealed our real names, or we would have ended up like Rumpelstiltskin, tortured by those who knew of his real name.

But sometimes, I can’t help but wonder why no one ever questioned why I was called the Evil Queen, and why I was never given a real name in the books.

Was I so superficial to the world, so stereotypical and mundane? Why was I treated as if I were the monster of the week?

You know what I think? I think that the world never got the time to hate me. It just wanted to hate me long before it met me.

If I tell those who detest me about the true nature of their little princess, would they ever care about me half as much as they care about her?

I know that deep inside, they adore me. They like the way I talk, walk, dress, and even the way I kill.

They are just afraid to admit how much they love me. I am the Snow White Queen, strong enough that I don’t need anyone’s pity or love, because I am loved by the greatest and most majestic heart in the world:
Mine.