I sit with a sheet of paper. Today I will be trying to interview Lord Brinn once again. If you're unfamiliar with the failed attempt click here. Lord Brinn is the main antagonist in Sacrifice Her

Lord Brinn walks in wearing golden robes and carrying a bouquet of flowers.

Lord Brinn: For you.

I take the flowers as he sits down. I have nowhere to place them but the small tabler between us.

Me: Thank you, white roses. Nice.

Lord Brinn: I'm sorry about getting off on the wrong foot scri... I mean Sheena-kay.

I force myself to keep up a smile. At least he called me by name.

Me: So let's get to the interview. I have five questions like I did with Deidra.

Lord Brinn: Yes she really showed me up the other day.

I look on in silence. I never recalled it going like that at all.

Me: First question. Why do you have to do human sacrifices for The God of Gore.

Lord Brinn: Long ago before my generation's time. We were cared for by another god. I will not call her name but we disrespected her and l;ost her blessings. She was merciful enough not to destroy us but she left my ancestors to the mercies of other gods and sypernatural elements which harm anything or anyone left unprotected. For a time my people were slaves to the The River Women. Able to transform into sea creatures, they were terrible masters to my people who once lived on an island. You see being surrounded by water left us at their mercy and those who tried to escape had their boats smashed to bits and were eaten by the River Women and their children which were creatures of the sea. Then one day God of Gore offered our people salvation. For yearly sacrfices he'd take us away from the island and to an oasis in the desert where the River Woman couldn't venture. We accepted and today we still do human sacrifices in servitude, worship and gratitude to God of Gore's gift of our freeeom to us.

Me: Excuse me but isn't that just exchanging one prison for another?

Lord Brinn: If our lives are as prisoners. I'd rather it be on our terms than the random lashings and brutality of moody river womem.

Me: Hmmm...next question. Why did God of Gore task you with returning her? Aren't there guards and specific individuals tasked with doing that?

Lord of Brinn: (sigh) Alas there was incident years ago I'd rather not talk about. All I'll say is that it had to with the human sacrfices and was before my time. It left God of Gore very angry and among other punishments he increased the number of human sacrifices, terrible affair.

Me: What kind of family life do you have?

Lord Brinn: I have a wonderful family. As Top Class I wanted for nothing and my family line is full of leaders, advisors and men of worth. I was married in my early teens and have two sons and one daughter. I have a statue up in my honour you know. Want to see? 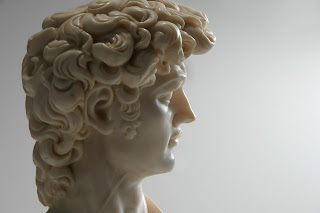 Lord Brinn: Of course you're too awed to say many things. On with the interview.

I stare intently at my interview sheet before looking up.

Me: What would happen if you fail to recapture Deidra?

Lord Brinn: One of three things. None of them good. All end with our lives in the crapper. The best being God of Gore increases the number of human sacrifices expenentially and worst he destroys the city and everything it. I'd rather not discuss it anymore.

Me: Oh. Final question. What would you if Deidra's right?

Lord Brinn: Blasphemy! I refuse to answer that question. (whispers) Are you trying to bring down God of Gore's wrath.

Me: No because I believe in a God who'd kick his blood loving ass.

Lord Brinn: So you serve a god too?

Me: Christianity has a different set of rules but yes.

Lord Brinn: You have some good morals. Maybe even for a second wife.

Me: Um, I think this interview is over. Farewell Lord Brinn.

Lord Brinn: Wait, I was going to invite you on a night tour of Faux City.

I dash off grasping my belongins to my chest.

Lord Brinn leans back in his seat.