I have been a fan of Rachel Caine for years and now she's collaborating with Ann Aguirre for a 2018 release. The cover made me scream out loud because I loved it so much. Yes I am a Rachel Caine fan but most covers don't let me scream out loud, no matter the author or visuals. But there's something so captivating about the way this cover was done that it gripped me. Feel free to see for yourself below and read the summary too. I'm very excited for this release. If you can't tell. 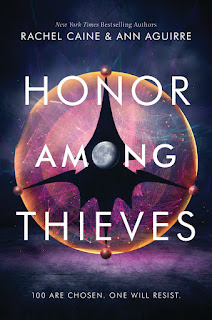 Summary on Goodreads: Zara Cole has been in and out of New Detroit’s rehab facilities for treatment of her antisocial disorder. There’s no adjusting Zara’s attitude, though. A painful past has made her stronger than most, which is why she chose life in the Zone instead moving with her family to Mars. In her eyes, living inside a dome isn’t much better than a prison cell.
Still, when Zara commits a crime that has her running scared, jail might be exactly where she’s headed. Instead Zara is recruited into the Honors, an elite team of humans selected by the Leviathan–a race of sentient alien ships—to explore the outer reaches of the universe as their passengers.Zara seizes the chance to flee Earth’s dangers, but when she meets Nadim, the alien ship she’s assigned to along with fellow Honor Beatriz, Zara starts to feel at home for the first time, along with a devotion she’s never experienced before. Yet nothing—not her Honors training or her street smarts—could have prepared her for the dark, dangerous truths that lurk behind the glitter of starlight.Honor Among Thieves is the first book in a daring new sci-fi series by bestselling authors Rachel Caine and Ann Aguirre.
Thank you for stopping by and what do you think of the cover?
at June 26, 2017