So today I'll be sharing a chapter sampler I got from Netgalley. This is a small excerpt of the full novel. Friday I'll be reviewing a comic (full book). So read on and thanks for coming. 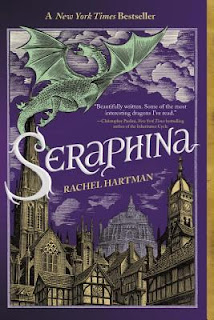 Summary on Goodreads: In the kingdom of Goredd, dragons and humans live and work side by side – while below the surface, tensions and hostility simmer.
The newest member of the royal court, a uniquely gifted musician named Seraphina, holds a deep secret of her own. One that she guards with all of her being.When a member of the royal family is brutally murdered, Seraphina is drawn into the investigation alongside the dangerously perceptive—and dashing—Prince Lucien. But as the two uncover a sinister plot to destroy the wavering peace of the kingdom, Seraphina’s struggle to protect her secret becomes increasingly difficult… while its discovery could mean her very life.

Seraphina's born in a world where humans and dragons co-exist but there's still fear and distrust. A talented musician, she kept a secret that's known by few including her father and his friend and her confidante Orma. I loved that the main character had close characters not just with males but with adults. Too often fiction sadly tries to depict men who are close to children as creepy or ill-intentioned. I even saw a list once that warned against writing stories with males holding girls or standing too close if they weren't family members. Seriously? I'm glad this book never took on that nonsense. In this brief excerpt you get a fantastic inside look at a fantasy world where a murder has taken place, humans and dragon kind are at odds and a girl with a secret might hold the key to solving or making things even worse, maybe both. The author wrote a vivid story that held me with every page. I have wanted to get this book but it kept falling off my radar. It won't again and I highly recommend this book. Especially to fans of stories with dragons. Dragons are awesome.