Book Review: Ballad of the Beanstalk

I love a fairytale retelling that surprises me. While I kind of figured out the end of the main character early on, it was more because of Jack and the Beanstalk's limited lore than any misdeed on the author's part. The story was still a good journey from start to finish. Great in some parts even. I met the author through wattpad and had been interested in her books previously because of positive reviews. When she offered me an arc of her next book on Twitter...well I said yes! Now let's get to the review.

Title: Ballad of the Beanstalk by Amy McNulty 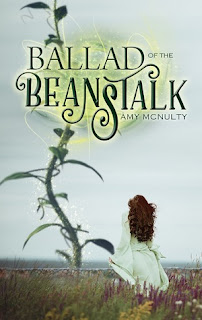 Summary on Goodreads: As her fingers move across the strings of her family’s heirloom harp, sixteen-year-old Clarion can forget. She doesn’t dwell on the recent passing of her beloved father or the fact that her mother has just sold everything they owned, including that very same instrument that gives Clarion life. She doesn’t think about how her friends treat her like a feeble, brittle thing to be protected. She doesn’t worry about how to tell the elegant Elena, her best friend and first love, that she doesn’t want to be her sweetheart anymore. She becomes the melody and loses herself in the song.
When Mack, a lord’s dashing young son, rides into town so his father and Elena’s can arrange a marriage between the two youth, Clarion finds herself falling in love with a boy for the first time. Drawn to Clarion’s music, Mack puts Clarion and Elena’s relationship to the test, but he soon vanishes by climbing up a giant beanstalk that only Clarion has seen. When even the town witch won’t help, Clarion is determined to rescue Mack herself and prove once and for all that she doesn’t need protecting. But while she fancied herself a savior, she couldn’t have imagined the enormous world of danger that awaits her in the kingdom of the clouds.A prequel to the fairy tale Jack and the Beanstalk that reveals the true story behind the magical singing harp.
The Good: The plot was great and fascinating. I don't believe there are nearly enough great Jack and the Beanstalk retellings out there. At least I haven't found them. Clarion is a good MC in that she wants what's best not just for herself but those around her as well. The death of her father doesn't make her get bitter and hard. Instead she grieves but still cares about others. When she goes from loving her female friend and ex-girlfriend Elena to falling for Mack. A dashing young Lord from another kingdom, we get to see bi-sexuality explored without hitting the nail over the head. Then the story becomes so much larger and grander when she reaches the land of the giants. Amy's writing truly shines in this half of the book. The ending is both surprising and expected. But in the best of ways when retelling a story that is not an automatic happily ever after.

The Bad: For close to the first hundred pages the story follows a good but slightly simplistic writing style. We have a great plot but seemingly straight forward complicated romance with magic in the mix. Then after that the story expands in a huge way in the land of giants and other surprises. You might be wondering how that's bad. While that half was better it made the first part of the book look way more simplistic and childish in comparison. Writers need to beware that the huge upheaval in their books balances out the rest of the story and not belittle it. Also while bi-sexuality was well explored. I think in the first maybe eighty pages or so, Clarion's relationship with Elana as lesbians was poorly defined. Clarion's confusion overwhelmed the actual story and made it seem that the author was as confused as she was. Which should not be the case or in the writing.

Verdict: Despite a few pitfalls this is a great book with a unique take on the beanstalk tale. I'd give it four stars without batting an eye. Especially when we get to the world of the giants which not only greatly expands the story but even gives the local witch from Clairon's town a much better story line than that strange woman who makes potions and herbs. You will be very happy you got this book and surprised by all the great additions within.