Waiting on Wednesday: Return to the Isle of the Lost : A Descendants Novel by Melissa De La Cruz

Waiting on Wednesday is held weekly by Breaking the Spine. This event spotlights upcoming releases bloggers are anxiously awaiting to get their hands on.

Today I am sharing a sequel to a book based off the popular Disney television movie The Descendants. 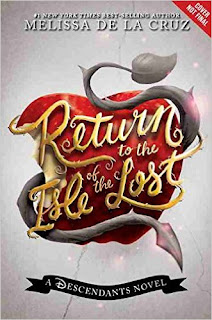 Book: Return to the Isle of the Lost : A Descendants Novel

Summary from The Book Depository: There's no place like home. Especially if home is the infamous Isle of the Lost. Mal, Evie, Carlos, and Jay haven't exactly turned their villainous noses up at the comforts of Auradon after spending their childhoods banished on the Isle. After all, meeting princes and starring on the Tourney team aren't nearly as terrible as Mal and her friends once thought they would be. But when they receive a mysterious invitation to return to the Isle, Mal, Evie, Carlos, and Jay can't help feeling comfortable in their old hood-and their old ways. Not everything is how they left it, though, and when they discover a dark mystery at the Ise's core, they'll have to combine all of their talents in order to save the kingdom.

I really enjoyed the television movie and got the first book soon after. The characters are fun to follow and it will be very interesting to see what they get up to in this upcoming book.
at December 16, 2015

Email ThisBlogThis!Share to TwitterShare to FacebookShare to Pinterest
Labels: Waiting on Wednesday