I know I said I would be back on Monday but I had to make this post. In November  I bought a Halloween novella and read it. I thought the book was poorly done and after considering things left this rating on amazon.

I also left a review explaining why I thought it was poor. Yes it was tough but I thought the book was bad and left a review saying such. There was another review that was glowing though. So like in life everyone has their own thoughts on something. To date there a two reviews on this book. My two star and another reader's four star review/rating. I have no intention on changing my review in light of what happened. I have never back tracked on a review in my life. I won't start now. If you think I was harsh fine but please read on because I'm certain no reader/author I know would ever do what this author did in response.

But then I also did this review for another of her books. One that I thought was way better. Note the date on both, November 16, 2016. Left both reviews on the same day.

Now you might wonder then why do I have a post with the spiteful author title. It's because apparently this same author decided that my negative review was so uncalled for that she decided to do a posts for IWSG. But not just any post but one lying that not only did I leave a negative review but also that she came to my blog in November 2016 and left me a comment. One that apparently left me so incensed that I went back to Amazon and changed my review from a three star to the current two. Funny that she never mentioned that I left more than one review, just the two star one.

Now needless to say when I read this I was flabbergasted. I don't care that she didn't call me by name. This lie was clearly well thought out and planned. Not only because none of this happened (aside from leaving a two star review). But also because I had been introduced to this author through another writers blog post. I read her story and felt so touched that I decided to buy her book despite having others higher on my list. When I was disappointed by the book, I left my frank review like I always do. I also saw that I had a previous book by her and read that one as well. That book I was happy with and left a four star review. Which was after leaving the negative one.

Here is the link to the IWSG blogpost if you want to read this. I refuse to call this female by name. Also here is the snippet of the lie that blew me away. 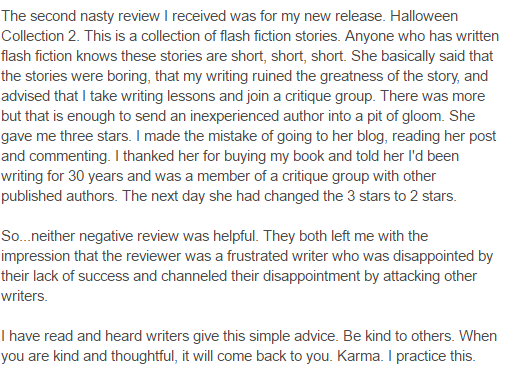 However if being lied on wasn't bad enough. I got to see comments from readers who had been tricked by this author's false story. Their thoughts was not just on the male reader who also left a bad review but of this other female reader (me) who not not only left a negative review but also decided to change her rating because an author had the nerve to visit her blog. The one below pulled me over the edge and made me write this post. It was by an author and blogger I look up to. I just couldn't accept seeing these words she had been bamboozled into writing.


Image (and name) removed by request of the commenter who was a victim of a blogger's lies. I'll just leave the line from her comment. I'm just grateful she immediately knew the accusations were untrue the second she saw my blogpost.

The line that got me: 'That last one, who lowered the star rating from a 3 to 2. Wow. That was uncalled for.'

No lie, it hurt me to my core to see this. Because it just didn't happen.

Note: I have received an apology for the above comment. So glad that the truth is out now and spreading. Thanks for all the support everyone.

I had also decided to check through my November post to see where this author left me this so called comment that supposedly made me drop my rating. Readers, there was no such comment. She never came to my blog and left a comment in November. If she had, I would have kindly let her know that I have given low star reviews before including for best selling authors like Julie Kagawa. And when readers commented on my blog, none thought my review and low rating were mean spirited. I frankly stated about the poor writing and story and everyone was fine with my frank opinion. At least one or two also commented on this author's blog as well.

Which comes to what I did after seeing all these lies. I decided for starters to leave a comment of my own. Read it below. I'm not afraid of calling out liars and I did so without mercy. 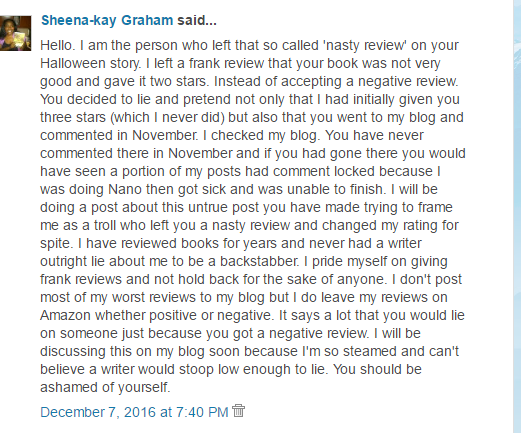 Yeah. I stick to every word that I said. You don't like my review, fine. But to go lie that I changed my rating and then insinuate later that I must be some bitter woman whose writing career didn't take off? How dare you? You want to know who I am. Let you give you five quick points.

1. I am a proud christian Jamaican lifetime virgin who doesn't have the time to go around changing ratings like the seasons just because an author didn't kiss the ring I don't have.

3. For real? You decided to lie on a reviewer? For real?

4. I have early onset arthritis and exhaustion issues. Your evil lying post almost gave me a heart attack you lying sack of human parts. Shame on you! I had to walk around my room trying to calm myself as my body is in a somewhat delicate state and didn't need your bullshit. But at the same time my soul is a strong old bird and is raining 32 year old fire on your lying ass.

5. I am a drafter who has a proud little freelancing job online ghostwriting drafts for potential writers of the future. So yes my life must suck so much from my lack of books published by me. It's not like I have plans for at least six books in 2017 (one a stand alone the other a five novella set), a photo shoot to plan a new NA series in 2018 and other self publishing plans. So yeah, I'm real bitter. I hate having a good life for myself. What a bummer. Just wait until I get that call from an agent. Awful!

So to end this. Forget you lady. You don't like my review, fine. But to go around lying on me? How low can you go? Go with God and good night.

PS- Dear Readers: Sorry that after IWSG I had to post this ranty mess. If I go online and lie on anyone I hope to get roasted a thousand times worse. I review and leave frank thoughts. You don't have to like a review but lying never solves anything. God Bless you all and let's stay honest.
at December 07, 2016

New comments are not allowed.