Tired Out and Thanks

When I started 2014 A-Z Blogging Challenge I was excited. I hadn't done my posts in advance but I was determined to take part for a second year. What I didn't anticipate was how much of an inconvenience not having a personal computer and also being under the weather would be. At first I thought it was just a little bug but now I have a full blown flu that has not only made me quite sick but unable to get much of any sleep since Thursday night. Also for nearly two days my father had computer issues and couldn't bring the laptop home. When I had reached H, I had decided to  finish the week then end it but issues got in the way of me commenting on other participants. Which is something I hate when so many visit me. So I refuse to post when I can't comment back.

So I will be finishing up now but I want to say this year has been the best. So many of you have stopped by to read and marvel at posts that I sometimes create right before posting. The fact that you enjoyed them so much was heart warming. I do plan to do a post for M (Tuesday) and use part of Saturday night to comment on all those who visited H and try to catch up on some blogs on my blogroll.

Thanks again and just for Old Times sake I'll write what I planned to do this week.

I - Ice: Hey before you judge did you see Frozen? I haven't but the movie  trailers are amazing and ice plays a special role.

J - Jesus:  If you need an explanation, please just go.

K - Katnis Everdeen: This one was decided long before. The Hunger Games Trilogy is a literary and Katniss is a big part of that. 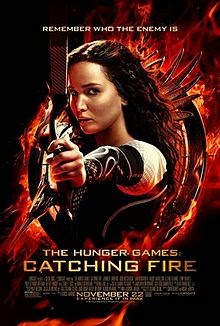 Anyway see you Tuesday after which I will be taking a break until April 28. Love you guys.
at April 12, 2014

Email ThisBlogThis!Share to TwitterShare to FacebookShare to Pinterest
Labels: 2014 A-Z Blogging Challenge, Tired Out and Thanks