Waiting on Wednesday: The Savior's Champion

Jenna Moreci is an author and Youtuber who has a second novel incoming. That is The Savior's Champion, the first in a new series. The cover was revealed recently and looks phenomenal. There's also an epic book trailer. The book will be released April 2018. Jenna is a very talented writer who also gives great writing advice and does cool videos. Her nickname's Cyborg. That's just awesome. 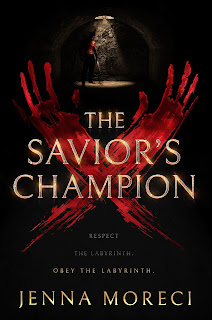 Now Tobias is thrown into the Sovereign’s Tournament with nineteen other men, and each of them is fighting—and killing—for the chance to rule at The Savior’s side. Instantly, his world is plagued with violence, treachery, and manipulation, revealing the hidden ugliness of his proud realm. And when his circumstances seem especially dire, he stumbles into an unexpected romance, one that opens him up to unimaginable dangers and darkness.

Thanks for stopping by and how do you feel about this upcoming release?
at January 17, 2018