Book Review: The Jumbies and Read-a-thon Wrap Up

Due to falling behind on post, Update Day/ Goals Hop will be done tomorrow. IWSG, Wednesday. 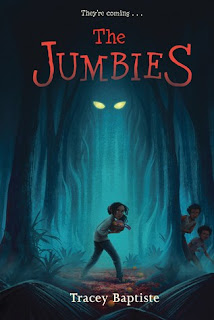 Summary on Goodreads: A spine-tingling tale rooted in Caribbean folklore that will have readers holding their breath as they fly through its pages.
Corinne La Mer isn't afraid of anything. Not scorpions, not the boys who tease her, and certainly not jumbies. They're just tricksters parents make up to frighten their children. Then one night Corinne chases an agouti all the way into the forbidden forest. Those shining yellow eyes that followed her to the edge of the trees, they couldn't belong to a jumbie. Or could they?When Corinne spots a beautiful stranger speaking to the town witch at the market the next day, she knows something unexpected is about to happen. And when this same beauty, called Severine, turns up at Corinne's house, cooking dinner for Corinne's father, Corinne is sure that danger is in the air. She soon finds out that bewitching her father, Pierre, is only the first step in Severine's plan to claim the entire island for the jumbies. Corinne must call on her courage and her friends and learn to use ancient magic she didn't know she possessed to stop Severine and save her island home.With its able and gutsy heroine, lyrical narration, and inventive twist on the classic Haitian folktale "The Magic Orange Tree," The Jumbies will be a favorite of fans of Breadcrumbs, A Tale Dark and Grimm, and Where the Mountain Meets the Moon.

There's no doubt that folklore and stories from the Caribbean are not as well known worldwide. But like all regions we have tales to tell and Tracey did this very well with The Jumbies. The author clearly wanted to tell a tale that made kids look behind them long after they finished. An MG, not afraid to deal with loss, monsters and making hard choices. The protagonist Corrine unwittingly brings terror to her island home by going into a forbidden part of the forest and catching the attention of a powerful Jumbie. What followed is an adventure that's both amazing yet rooted in reality. From fighting monsters to dealing with homelessness and child abandonment. Issues of both the supernatural and reality are explored in this story. In the end, Corrine has to make some tough decisions and every action she makes not only has consequences for her but her loved ones as well. Highly recommend and I'm looking forward to the sequel coming later this year.

I ended up reading two books in the Summer Biannual Bibliothon Reading Challenge this year. Dead Man: Dark Mansion of Forbidden Love and The Jumbies. It was nice and also glad I took part in five of the seven days in the blog book tag last week. I'm definitely interested in taking part in the Winter version but only in the reading challenge. The blog part is kind of dead when it comes to participation and cross promotion.

Booktube-a-thon was great on twitter. I took part in reading sprints and even mini challenges and got retweeted by the main page a few times. A lot of fun. Sadly I didn't finish any books in the reading challenge. Definitely, want to take part next year. They have strong participation and cross promotion in all areas. Amazing.