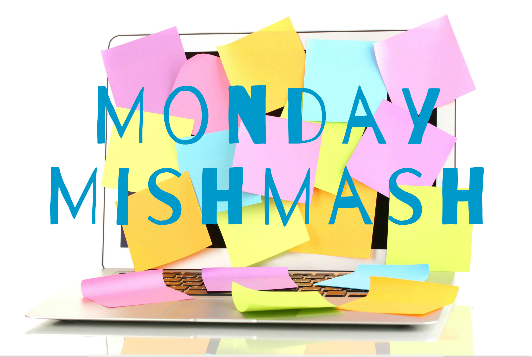 Monday Mishmash is a weekly meme sharing your thoughts and happenings. You just grab a button and create your post. Sure I guess I write it differently from most but moving on....

1. Catching up on some reading with Sweet Evil by Wendy Higgins and Triangles by Ellen Hopkins.

2. Made a private list on the priority manuscripts I need to finish this year.

3. Set things up so I can publish my first book by June. No more delays.

4. Getting posts ready for April's A-Z. I'm participating with two blogs. More on that in the week.

5. Watch the sinking of Shadowhunters series on Free Form. Did not enjoy this from the start and now even the most dedicated fans are starting to turn on it. The numbers have been steadily declining from a start of nearly two million viewers to under a million by episode 3. Netflix was where I slowly watched the first two and then risked the third one live. Will watch the next one just to be part of the group able to say "Should have kept the movie." I know it did not make much but it was not nearly this bad. If anyone disagrees feel free but in my opinion the show is just not good.

Danielle Paige has started a new book series coming out later this year. On January 28 the cover was revealed and I must say it was quite a beauty. Even better there was an excerpt along with the reveal but first feast your eyes on this.

Summary: Seventeen-year-old Snow has spent the majority of her life within the walls of the Whittaker Institute, a high security mental hospital in upstate New York. But deep down, she knows she’s not crazy and doesn’t belong there. When she meets a mysterious, handsome new orderly and dreams about a strange twisted tree, she realizes she must escape and figure out who she really is.
Using her trusting friend Bale as a distraction, Snow breaks free and races into the nearby woods. Suddenly, everything isn’t what it seems, the line between reality and fantasy begins to blur, and she finds herself in icy Algid—her true home—with witches, thieves, and a strangely alluring boy named Kai, none of whom she’s sure she can trust. As secret after secret is revealed, Snow discovers that she is on the run from a royal lineage she’s destined to inherit, a father more powerful and ruthless than she could have imagined, and choices of the heart that could change the fate of everything…including Snow’s return to the world she once knew.
This breathtaking first volume begins the story of how Snow becomes a villain, a queen, and ultimately a hero.

So exciting and while September might seem a while away there is no better time start reserving some book buying money than before the release date. For February this hardback is on my list. Paperback (and kindle) is also available for pre-order.