I am back and today I have a review for you from the paranormal side of things. This author gives us a kick ass heroine and a crazy new world where Rads (radioactive zombies) and politicians are...well still politicians. Oh and tomorrow will see my first regular weekly movie review and Thursday will see the return of Getting Personal. 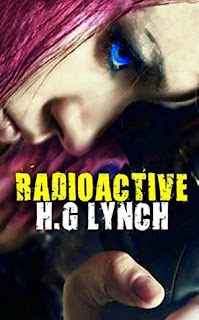 Summary: THE WORLD ENDED. NOW THERE ARE ONLY RUINS...
A hundred years after The End, Britiain is run by a new government and going out after dark is suicide; after Curfew, the Shapers - the new and brutal police force - roam the streets, looking for Rule-breakers, and if they catch you, they'll kill you. But the Shapers aren't the only thing to worry about, because thanks to nuclear radiation, there are the Rads - twisted, flesh-eating monsters that used to be human. Despite all that, Andy has a pretty good life; she has a small home, she does trade in scavenged items to keep food on the table, and years after her family was killed by Shapers, she still has her Uncle Bret and her best friend, Rex. But all that changes when a dangerous, gorgeous ex-Shaper named Shayne saves her life, and the rebellion recruit her to steal a Cure for the Rads - from inside the government's headquarters. It's a suicide mission, Andy is sure, but she has no choice - the rebels are threatening to kill the last people she has left on earth unless she does what they want. Can she get the Cure and escape alive? And more importantly, can she do it without falling in love with the traitorous guy who won't leave her alone?

The Good: From the start you are dropped in a world that has been devastated by war and the survivors have to live under a strict regime that has the brightest taken away to the government headquarters. Not to mention Shapers who are supposed to be protectors but shoot anyone who misses curfew or just pisses off the wrong people. Oh and Rads which are radioactive flesh eating zombies. Yes this book drops you straight into the mess and I love it. Our protagonist Andy makes her living scavenging things for people and getting paid. She has her best friend Rex and her Uncle Brett the only family she has left since Shapers took her father and murdered her brother and mother. Then she meets this strong Mystery man Shane and things get really interesting. By interesting it soon blows straight to hell and through all the crazy and mid-crazy of this book I had to read and get to the end. You will be at the edge of your seat reading through every page to get to the end of this crazy ride disguised as something as innocuous as a book.

The Bad: While I do love the book there were a few things that did irk me. First off Shane's over possessive behavior with Andy. While some might fight this endearing I think he pushed stalker territory including doing some things without her permission. Second that some scenarios seemed forced just to get Andy and Shane together or in tight spots that didn't make complete sense for someone as tough and smart as Andy to get in. While these things didn't ruin the book I do dislike scenarios that seem in-genuine

Verdict: Despite a few flaws this book is worth a read by any fan of zombie novels, kick ass heroines, hot guys and just reading in general. I had a lot of fun reading it and I believe you will too.