Slippery Souls: The book to Read for Spring 2012

I entered several Goodreads giveaways and won a book. The book was Slippery Souls by Rachael H. Dixon. I got the book in the mail this morning and started reading. I haven't been able to stop reading it except for the biggest necessities (including writing this blog to get the author a cult following). The novel starts with Libby who has decided she needs a change of pace in life. So what happens? First she's killed in a car accident along with Rufus, her dog. Then in the afterlife her dog gets human like-qualities by somehow absorbing her soul. Crazy? That's just a few pages in! Even in the afterlife she's not safe and the summary predicts her getting hunted by monster slayers and more insane paranormal drama! Trust me, this book is exciting, clever and hilarious. It's described on the cover as urban fantasy....by the seaside. A great read with a talking dog has to soar. This book is for readers 16 and over and I recommend it to all my followers and friends.

Libby has hit a bad patch in life, and just when she thinks things can’t get any worse she's killed in a car accident alongside her dog Rufus. During their transition to the afterlife’s Sunray Bay, Rufus somehow manages to absorb her soul – which, in turn, gives him human-like qualities and renders her soulless.

Accompanied by her now talking dog, Libby tries to unravel the mystery of her slippery soul, encountering many setbacks and dilemmas along the way. She has no idea why a group of monster slayers, headed by an ex-convict, are hunting her down, and when she teams up with rogue Peace & Order Maintenance Officer, Grim, she’s shocked to discover that there’s a mob of disgruntled vampires and a very angry mayor hot on their heels too.

Libby has never felt so unpopular, and begins to wonder whether it’s possible to die twice in one day... 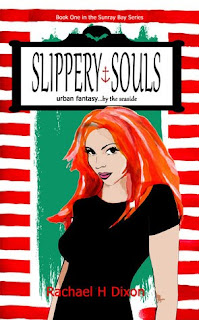 I have also sent the author an invite to guest post on her goodreads account.
at February 29, 2012