Movie Love: Dora And The Lost City Of Gold 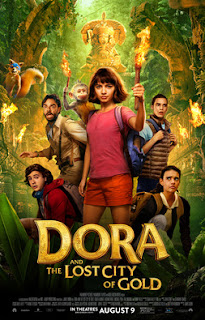 I saw the movie last Saturday and it was an adventure in and of itself. Dora was a young fearless teen willing to go above and beyond for friends, family, and adventure. It was great seeing a girl going for what she wanted with self-confidence and attitude. Yes, some considered her strange but she was willing to be herself. Even after having a sad moment when the teen was made to feel bad by her own cousin, Diego. This girl from the animated series for children turned live-action film, was a badass.

Dora translated from animation to live-action did a spectacular job. Even keeping her catchphrases and quirks. It was fun seeing others look at her strangely when she spoke to the screen breaking the fourth wall like in the animated series. Plus they did a magnificent job with Swiper. The CGI fox looked and sounded real. The monkey, Boots worked as well and had his own moments of hilarity. The cast did their job providing a fun and adventurous experience that will be loved by children and translate to adults like myself. My theater cheered and had fun with what happened on screen. Children and adults alike. The stakes were both funny and serious. Though a grand twist was seen from miles away. The challenges Dora and company faced were satisfying to watch.

If you want a fun adventure film to bring the family together. This is for you. Hell, even to curl up by yourself and have a bit of danger.

Email ThisBlogThis!Share to TwitterShare to FacebookShare to Pinterest
Labels: Dora and the Lost City of Gold, Movie Love