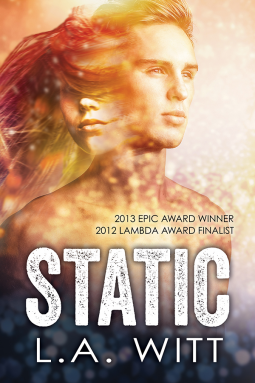 Summary: After two years together, Alex has been dreading the inevitable moment when Damon learns the truth: that Alex is a shifter, part of a small percentage of the population able to switch genders at will. Thanks to a forced implant, though, Alex is suddenly static—unable to shift—and male. Overnight, he’s out to a world that neither understands nor tolerates shifters . . . and to his heterosexual boyfriend.

Damon is stunned to discover his girlfriend is a shifter, and scared to death of the dangers the implant poses to Alex’s health. He refuses to abandon Alex, but what about their relationship? Damon is straight, and with the implant both costly and dangerous to remove, Alex is stuck as a man.
Stripped of half his identity and facing serious physical and social ramifications, Alex needs Damon more than ever, but he doesn’t see how they can get through this. Especially if he’s static forever.
- Winner: Best Science Fiction Romance in the 2013 EPIC Awards!
Finalist: Best Transgender Fiction in the 24th annual Lambda Literary Awards!
Winner: Best Bisexual / Transgender Sci-Fi / Paranromal / Fantasy in the 2011 Rainbow Awards!
(This award-winning title is a revised and edited second edition of Static, originally released in 2011 by Amber Allure.)

Another top selection from Riptide Publishing. Last month I lauded over the love in The Beginning of Us and today I get to deliver the delicious reading of Static. Imagine if you will being in a relationship only to find out that your significant other can change genders. But that's not all, you find out after your significant other's parents drug your partner and puts an implant that now has him or her stuck as the opposite sex of who you're with. So if you were dating a man, he's now stuck as a woman or vice versa. Tell me that isn't a mind bender.

In Static this happens when Alex has to reveal 'her' secret of being a shifter to her boyfriend Damon after fanatic parents install an implant that not only stops her gender shifting/switching but has 'her' now stuck in the body of a male. Damon is naturally shocked but tries to help Alex in a world where shifters often treated as freaks or abnormalities. Being static is natural for Damon who has always been male but for Alex it is a hell that leads to heavy drinking, depression and anger at a world that won't accept that simple gender roles no longer apply. Through friends both at home and work Alex tries to work through being static and maintaining a relationship with Damon who naturally has reservations on being with a man since he's straight. The novel shows readers that this book is talking about more than just gender. That being different is often considered dangerous and if we're not careful people will try to destroy or corrupt what makes us special just to make themselves more comfortable. Static is a book people should read no matter what side they are on the gender/sexuality debate because this book is about accepting differences and not harming people just because we don't agree with their lifestyle. The black market implants to me symbolize the different ways people, sadly including parents, try to change others by diabolical means in the name of social acceptance. Throughout the book Alex bravely tries to return to the person he/she once was and is willing to even take risky surgery to get the implants out and possibly sending the parents who did this injustice to prison. Even with a teen sister who might never forgive the act to consider. Damon also has a tough decision to make as he stands by Alex and sees just how  hard it really is to make a relationship work. Love is blind but circumstances aren't and the challenges Alex and Damon face and how they get through will have you glued to the last page. I started Monday night and read right til Tuesday morning, Yup almost no sleep, it's that good a must read folks.

I love this book because it pushes boundaries and makes me think. Also the characters press at my heart strings whether it is the different POVs of Damon and Alex or the other characters in the book including a transgender co-worker and a supportive detective and medical professional. Even the ones who disgust me like Alex's parents draw me in. Plus there are a few surprises in the mix and when an author does it as elegantly as L.A. Swift, her other books are probably must reads too. If you want a book to take you out your comfort zone this is for you and even if you don't still check it out to find a read that will knock your socks off and warm your heart.

Oh and I also think this book should be made into a movie. The themes are so fresh and some of the books being made into movies are already done before. This one is definitely a different take and I plan to make a Facebook page and do some hunting...I mean asking around. I think I'll add my suggestion to the note section on netgalley for the publisher. Yes I definitely will.